Road maps of Britain by John Ogilby, Emanuel Bowen, John Cary and others. 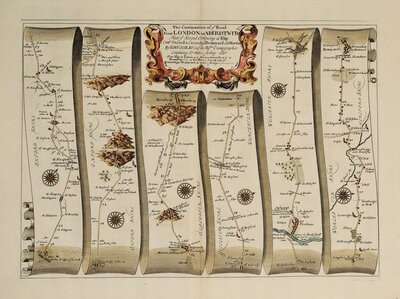 The eventful life of John Ogilby has been well documented. Born in Edinburgh in November 1600, he had a varied career as a dancer, dancing master, theatre owner, bookseller, printer, publisher and author of classical translations before establishing himself as one of the most important and famous of British cartographers. As theatre owner in Dublin, he lost his theatres and fortune in the Irish rebellion of 1641 was shipwrecked on his return to England and began a new career as printer  and publisher in London. Disaster struck  again when he lost his house and business  in the Great Fire of London in 1666. It was this misfortune that was responsible for his final change of career that was to give him lasting fame. He was appointed an arbiter to rule over disputes over land and property boundaries in the ruins after the fire and it was probably his association with surveyors, particularly William Morgan and John Oliver, in this task that sparked his interest in mapping London and Britain. His survey of London in association with William Morgan at a scale of 25 inches to a mile was published in 1677. It is the 75 year old John Ogilby's Britannia, published in 1675, depicting the roads of England and Wales for the first time in series of strip maps for which Ogilby is best known. This publication included a hundred maps showing the roads at a uniform scale (one inch to mile), and establishing for the first time the statute mile of 1,760 yards replacing the old British mile of approximately 2,500 yards but which varied geographically.  The road atlas was the first part of an intended publication to include a set of county maps and a set of town plans but  John Ogilby did not live to complete his work and only a few county maps were produced before his death on 4th September 1676. He was buried in St. Bride's Church, Fleet Street. 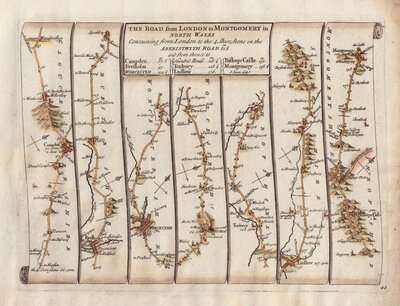 This series of maps were one of three publications in 1719 & 1720 representing John Ogilby's survey of the roads published in 1695 in reduced format for the traveller. The first to be published was Thomas Gardner's Pocket Guide to the English Traveller which appeared in a single issue on December 30th 1718 . The first volume John Senex's Actual Survey of the Principal Roads of England and Wales appeared only two days later, on 1st January 1719, the second volume published in early February. The book by Senex was preferred to Gardner's work and was published several times under the original title and at least seven times with the title The Roads Through England until 1792. 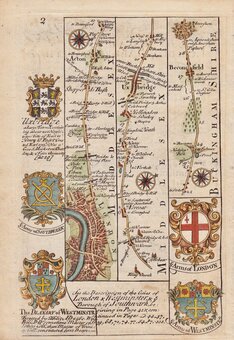 Containing county maps, road maps and topographical and historical descriptions, all engraved on copper by Emanuel Bowen (1693?-1767), Britannia Depicta was the first truly pocket sized road book for the traveller. Based on the surveys of John Ogilby published in large folio format 45 years earlier in 1675, it was the last and most successful of four separate schemes to produce such a work within the space of two years and extended to over fifteen editions until 1764. The other road books were by Herman Moll which was not completed, Thomas Gardner, published in a single edition in 1719, and John Senex published in  1720 running to about six editions with a number of derivatives. The works by Gardner and Senex, titled A Pocket Guide to the English Traveller and An Actual Survey of all the Principal Roads of England and Wales, were simple reductions of John Ogilby's plates but Britannia Depicta included a wealth of historical, topographical and informative notes compiled by John Owen together with the arms of major towns and important people and a set of small county maps. The county maps were all based on Robert Morden's small series published in 1701. For the strip maps, the Ogilby folio maps were engraved on two plates maintaining a reasonable scale while keeping the work pocket size. The space above the shorter central pair of strips which accommodated Ogilby's title were now on the left or right of a page and usually filled with a coat of arms. The titles to the routes were included on a separate page, often above a county map relevant to the route. The plates were printed on both sides of the paper, reducing the weight of the volume.  The notes by John Owen were engraved by Emanuel Bowen on the copperplate surrounding the road maps and also on separate plates. The maps have become affectionately known as "Owen & Bowen" maps. 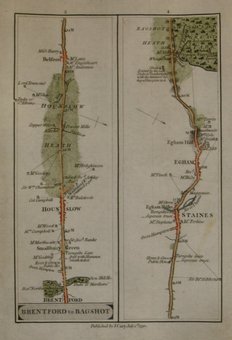 Road maps by John Cary (1755-1835) including his Survey of the High Roads From London published from 1790. The foremost map publisher of his time, John Cary's works were always finely engraved and produced with great attention to accuracy. He was appointed Surveyor of the Roads to the General Post Office in 1794 which no doubt gave him a good grounding for his road books. This set of road maps are no exception, engraved at a scale of one inch to a mile, Cary gives particular attention to houses and villas with owner's names, even marking points at which houses outside the scale of the map can be seen from the road, presumably Cary obtained individual sponsorship to finance the production. There were a number of editions between 1790 and 1810 and several states of the maps exist with a number of changes mainly to the names of the house owners for which, again, Cary was probably able to gain financial reward. This series of finely engraved maps were usually published in full hand colour. 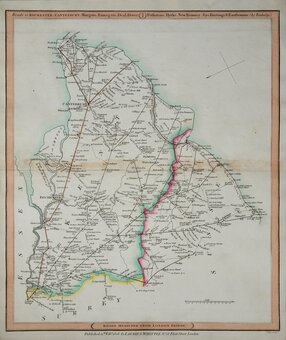 Maps prepared by Nathaniel Coltman for publication in Laurie and Whittles New Traveller’s Companion…in England, Wales and Scotland…London, Laurie & Whittle, 1806. Coltman worked for the post office and had worked for Laurie & Whittle in the preparation of their Welsh Atlas of 1805. Much of the material used by Coltman was gathered by John Cary while surveying the roads for the Postmaster-General in the 1790’s. The maps, at a scale of 7 1/2 inches to a mile, covered a larger area than previous strip maps and were more utilitarian, showing roads with their distances between places and county boundaries, the topographical information mainly limited to rivers and, in later editions, coastlines. They are neatly engraved by several engravers and hand coloured and it was a popular work with publications continuing until 1836.

Four maps were engraved by Joseph Bye (1779-1817). He was apprenticed to Benjamin Baker and later worked in partnership with Edward Jones and Benjamin Smith. With Benjamin Smith, under the aliases James Johnson and George Williams, they were convicted and sentenced to death at Dover 3 Nov 1817 for forging Margate Bank Notes. They were hanged November 27 1817.

Nine maps were engraved by Benjamin Smith (fl.1799-1817). Born in London c.1774 the son of Benjamin Smith a stipple engraver of portraits and historical scenes, he was apprenticed to Joseph Ellis in 1789 and later worked in partnership with Edward Jones and Joseph Bye. With Joseph Bye, under the aliases James Johnson and George Williams, they were convicted and sentenced to death at Dover 3 Nov 1817 for forging Margate Bank Notes. They were hanged November 27 1817.

The map issued in the later editions numbered 25 showing roads in Scotland is signed W.West of which little is known. His name appears on maps between 1804 and 1813 including Laurie & Whittle’s new chart of the coast of Norway 1812.

Robert Laurie (1755-1836) was apprenticed to Robert Sayer and after working independently for a few years, returned to work with Sayer. James Whittle (1757-1818) also worked for Sayer and with Robert Laurie became his junior partner as “Sayer & Co.” in 1790. In 1794 they took over the business and stock trading as “Laurie & Whittle”. Robert Laurie retired in 1812 and his son, Richard Holmes Laurie became Whittle’s new partner with the firm now trading as “Whittle and Laurie”.