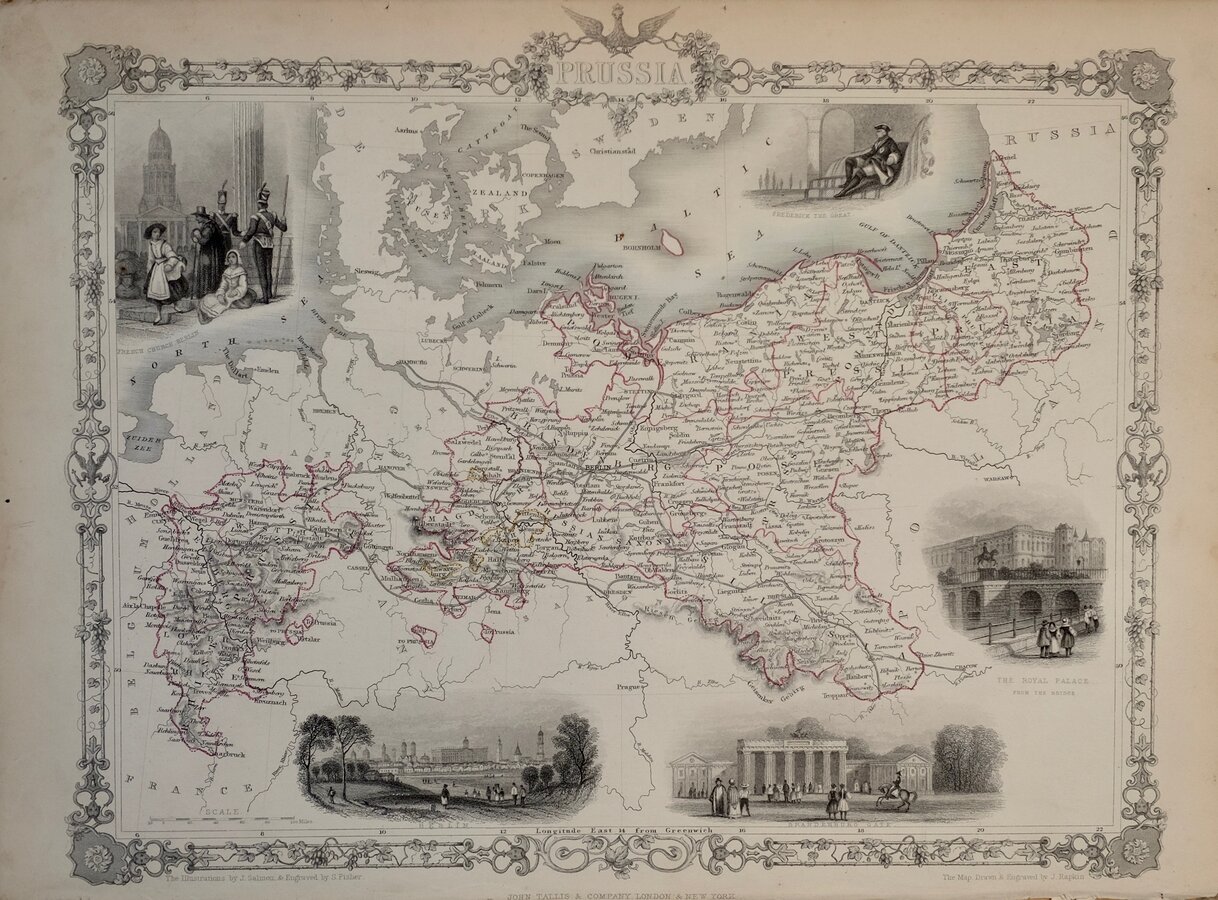 PRUSSIA
The Illustrations by J. Salmon, & Engraved by S. Fisher. | The Map Drawn & Engraved by J. Rapkin.
J.& F. TALLIS, LONDON EDINBURGH & DUBLIN.
Drawn and engraved on steel by John Rapkin (1813-1899), born in Southwark, the son of George Rapkin, a shoemaker and his wife, Elizabeth Harfy. John Rapkin’s brother, Richard, also became an engraver and another brother, William Harfy Rapkin became a copperplate printer. Rapkin married Frances Rudall in 1837 and they are recorded living in Clerkenwell in 1851 with eight children. By 1861, the family, now even larger, had moved to Argyll Square and later to Brixton. He traded as “John Rapkin & Son”  1867-1883 and “John Rapkin & Sons” by 1887. He died aged 85 shortly after the death of his wife of over sixty years. His sons John Benjamin (1837-1914), Alfred Thomas (1841-1905), Joseph Clarke (c.1846-1912) and Frederick William (1859-1945) all became engravers and the Rapkin firm continued into the 1970’s. The vignettes for the series were drawn and engraved by various hands. The maps were first published in parts from the end of the 1840's and issued as a complete volume, The Illustrated Atlas and Modern History of the World...Edited by R. Montgomery Martin Esq...John Tallis & Company, London & New York 1851. The work was re-issued a number of times until about 1865 and the maps were then used by Montgomery Martin, the author of the text, in British Colonies from 1854. The final appearance of the maps, with vignettes erased from the plate, were in geographical dictionaries and encyclopaedias until about 1880.
Vignettes of French Church Berlin, Berlin, Brandenburg Gate, Royal Palace, Frederick the Great.
Showing the modern countries; part of Germany, Poland, and Lithuania.
Good example from the 1851 edition without centrefold. Some fingermarks to margins. Small borrom margin. Original outline hand colour. Includes page of text by Montgomery Martin.